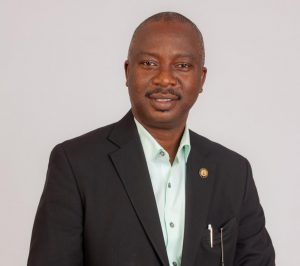 Adebola Ganny Badru was born on the 20th of August, 1963. He holds both an Ordinary National Diploma (OND) from Ogun State Polytechnic, Abeokuta (1985) and a Higher National Diploma (HND) from the Yaba College of Technology (1990). He went on to earn himself a Master’s in Business Administration (MBA) from the Lagos State University, Ojo (1997). He also holds a Post Graduate Diploma (PGD) from the Ladoke Akintola University of Technology, Ogbomoso (2011).

Mr. Badru began his Public Service Career in 1985 at the Lagos State Market Development Board before proceeding to serve at the General Services Bureau and the Internal Revenue Service between 1991 and 1999. He was later deployed to the Ministry of Finance and has since served at several Ministries, Departments and Agencies and at various capacities namely the Ministry of Transportation, Auditor General’s Office, Special Assignment (MOT), Lagos State Scholarship Board, where he served as Head, Foreign Scholarship Unit. There he helped conceptualise, create, develop and nurture the Unit. He also served at the Ministry of Economic Planning and Budget and the Motor Vehicle Administration Agency where he served from 2007 – 2016 as Personal Assistant to the Permanent Secretary before he was deployed to the Neighbourhood Safety Agency in 2016 and later back to MVAA in 2018 where he currently serves as the Director, Planning and Projects.

With an accomplished career spanning over thirty years in the Public Service, Mr. Badru has received various commendations such as Outstanding contributions to the Lagos Traffic Summit 2014, Outstanding contributions towards the successful hosting of Public Service Week Celebration (Walk for Fitness) (2009 – 2018), commendation from the Executive Secretary, LNSA for Creativity and Outstanding innovations in building a sustainable structure for the Neighbourhood Safety Corps and a prestigious Medal of Honor of the Department of Motor Vehicle Administration, State of Maryland, USA.

Mr Badru is very keen to transfer his wealth of knowledge to continue serving in other capacities and in his spare time enjoys travelling, sporting activities and mentoring youths. He is happily married with children.