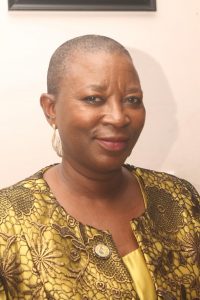 Lape Kilanko was born on the 19th of September 1963. She graduated from the prestigious University of Ife (now Obafemi Awolowo University) in 1986 and holds a Master’s Degree in Public Administration from the Lagos State University. Mrs. Kilanko is a member, Chartered Institute of Personnel Management of Nigeria (CIPM) and a member of the Nigeria Institute of Management (NIM).

Mrs. Lape Kilanko began her Civil Service career in 1999 under the Ministry of Housing. She has since diligently served, between 2001 to 2017, under a host of Ministries, Departments and Agencies namely, Lagos State Urban Renewal Board, State Treasury Office, Ministry of Establishments, Training and Pensions, Ministry of Housing, Lagos State Water Corporation, Ministry of Economic Planning and Budget, Lagos State Building Control Agency, Audit Service Commission and the Ministry of Information and Strategy where she was deployed as the Director in charge of Administration and Human Resources. She has served the State meritoriously in various capacities including the Special Committee to restructure the Lagos State Building Control Agency set up to address cases of building collapse.

In 2019 Mrs Lape Kilanko was appointed by the Lagos State Governor, Babajide Sanwo – Olu as the General Manager of the Motor Vehicle Administration Agency. She is happily married with children.