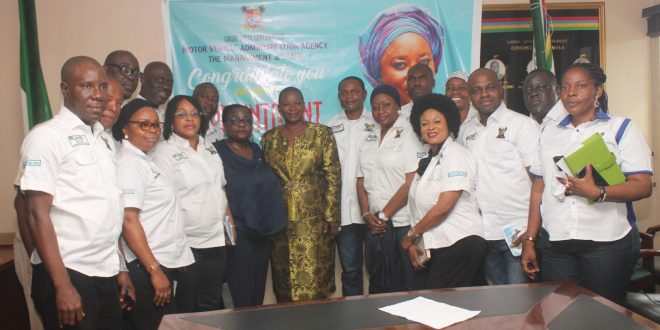 The Newly appointed General Manager, MVAA, Mrs Lape Kilanko and the former GM, ‘Deola Adepoju flanked by management staff during the Inaugural Meeting held in honour of Mrs Kilanko at the Conference room of the agency.

KILANKO CHARGES MVAA STAFF TO BE DEDICATED TO WORK

Notice: Trying to access array offset on value of type null in /home/lasgbackup/public_html/wp-content/themes/lagos_mini/framework/parts/meta-post.php on line 3

…..demand for improve in revenue generation.

The newly appointed General Manager of Motor Vehicle Administration Agency in Lagos State, Mrs. Lape Kilanko has charged the staff in the agency to be more dedicated to their work.

Kilanko charges staff during the meeting she had with the management staff at headquarter of the agency. According to her, every staff must put in their best to raise the standard of work in various locations they have been assigned to.

“Together we can take our agency to a higher level if we all are dedicated, committed and put in our best to our work”.

She also demanded that the staff intensify and double their efforts in making sure that revenue generation is of utmost priority, saying that the agency was established to render services to the populace in the state and in return generate revenue through the process.

Until her appointment, Kilanko was the Director in charge of Administration and Human Resources in the Lagos State Ministry of Information and Strategy. She also served the state meritoriously in various capacities including Secretary of the Special Committee to restructure the Lagos State Building Control Agency set up to address cases of building collapse.